The normally cold and dowdy “large meeting room” at the Jones Library became a warmer space in all regards last Tuesday evening, as town residents and well-wishers from around the Commonwealth gathered to honor retiring Library Director Bonnie Isman. With the harsh fluorescent ceiling lights turned off in favor of standing lamps and small festive lights, and the customary serried ranks of folding chairs removed so that guests could sit in smaller, more intimate groups or circulate between punch bowl and hors d'oeuvres, the room provided a surprisingly congenial setting for public remarks and private conversation. Longtime president of the Friends of the Jones Library Katie George coordinated and emceed the ceremony. 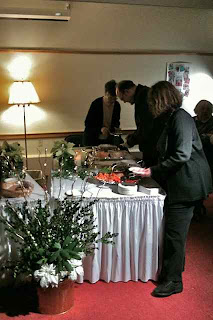 Speaking on behalf of the state legislature, Rep. Ellen Story, holding a large blue portfolio, made a point of explaining that she was presenting Isman with “a resolution—not a mere citation” of the sort so often offered to local notables and organizations. This was a much rarer and more significant testimonial.

Speaking in her own words, she praised Isman as “an absolute treasure” “who has made the Library the heart of the town, the beating heart of the town.” “We couldn’t have had anyone better,” she declared, praising Isman as a “mentor and friend.”

Head of the Massachusetts Board of Library Commissioners Rob Maier, who made a special trip from Boston for the occasion, added the warm praise of his professional body for the achievements of Isman, who had held a number of statewide posts, including the presidency of the Massachusetts Library Association.

Local author, journalist, and former longtime Jones Library Trustee Chair Cheryl Wilson echoed the praise of Story and Maier and delivered the most extended remarks of the evening.

“Bonnie Isman has been, as Ellen said, the heart of the Library.” Wilson singled out three representative achievements for particular praise. As Adult Services librarian early in her career, Isman started the “First Call for Help” direct information service for individuals and families unsure of where to turn for assistance in crisis situations. She was one of the seven signers for the application to automate cataloguing in western Massachusetts, which led to the Central/Western Massachusetts Automation for Resource Sharing library network (C/W MARS). Isman was “in at the very base” of these efforts and went on to serve as President of the Board as well as President and Chair of the Board of the Western Massachusetts Regional Library System (WMRLS). (At the state level, Isman served as President of the Massachusetts Library Association.) Finally, she said, Isman took her passion for and knowledge of the profession to the wider world, serving on missions to assist struggling libraries in locales as distant as the Republic of Georgia and Kyrgyzstan.

Those ventures abroad were far less taxing than some of the challenges she faced here at home, as for example, when she led the push to de-accession a major painting by Albert Bierstadt in the Library’s collection. Although controversial in some circles (even among trustees), the action helped to finance the major renovation and expansion of the building that Isman oversaw in the early 1990s.

“We have a star in our midst,” Wilson declared.

She went on to wonder how Isman had done it all. “She always kept calm, and this is what I admired about her.” “What is her secret,” she asked? Mass every morning? Yoga every afternoon? Even simpler than that, she said, citing Isman’s advice in a Simmons Library School profile: “Never let them see you sweat."

Noting Isman’s passion for quilts and puzzles, Wilson played with that metaphor: “I think she has put together the pieces of the quilt of the Jones Library in an absolutely perfect way . . . This place is humming because of her leadership and the wonderful staff she put together. The community, the patrons of the library—they love you and they love the library.”

In ceremonies of this sort, ritual gifts are obligatory. Isman received (what else?) books. One was the Library of America edition of the poetry of Robert Frost, one of her favorites, and of course, a centerpiece of the library’s collections.

With characteristic humility, Isman, obviously moved, said, “Everyone has been very kind,” but she demurred, “It’s not what I do, it’s what our staff does, it’s what our team does.”

Echoing her words of encouragement at the smaller ceremony at the Renaissance Center some two weeks earlier, she said, “I think you folks should be looking forward as well as looking at our illustrious past. I think the Jones will be doing some pretty exciting tings in the future.”

Declaring, “It has been kind of a controversial year, but every heart is in the Library,” Jones Library Trustee Chair Pat Holland led the audience of approximately one hundred in a heartfelt but somewhat shaky song of celebration (yes, individualistic “Amherst, where only the ‘h’ is silent"—and we all choose our own key).

The congratulatory cake was decorated with the deliciously appropriate phrase from Borges: “I have always imagined that paradise will be a kind of library.”