North Amherst Library Preservation Work Underway as Autumn Begins (and some reflections on maintenance, preservation, and the use of CPA funds)

I’ve always been a big fan of the North Amherst Library, and not just because it’s near my house at the edge of town and I drive past it every day. It is in fact one of the town’s hidden architectural and cultural gems. Founded in 1869 by 45 residents who paid fees to use it, the library was opened to residents in 1873 and incorporated in 1875. After the schoolhouse that held the collections succumbed to fire (a not uncommon fate for Amherst buildings in that era), a combination of private donations and public funding permitted construction of the current building, designed by Roswell F. Putnam of nearby Leverett and and dedicated in 1893. The site thus has the distinction of being home to both the earliest public library and the earliest public library building in town.

With its small but revolving, steadily updated collection and role as an exchange center for loan items from both within and beyond the Amherst libraries, the diminutive structure generates much more use than the casual visitor could possibly imagine. Add to that the dedicated staff and outreach efforts such as story time and the summer reading program, and you can see how it functions as a true multigenerational social hub of the North Amherst village center.

When we first moved to the area, the library was painted a uniform, somewhat-the-worse-for-wear, and unhistorical white. Our stereotypical vision of the New England town probably includes white, clapboarded houses and churches. Nowadays, this passes for simplicity in frugality. What most people probably do not realize is that it wasn’t until about the 1830s that white came into its own. Before that, many buildings were unpainted or used darker colors. (I often ask my students: If you were living in the hinterlands of Colonial western Massachusetts and wanted to make your own paint for a building, how would you do it? They get the point: one would turn first to mineral earths or vegetable dyes; hence the prevalence of reds and browns based on iron oxide. White paint required pigments derived from from chemically treated lead.) As commercial paint preparations came on the market in the later nineteenth century, a proliferation of new colors (many derived from new substances and processes) became more practical as well as fashionable.

An early photograph gives a hint of the library’s variegated hues, and a postcard shows the actual colors. 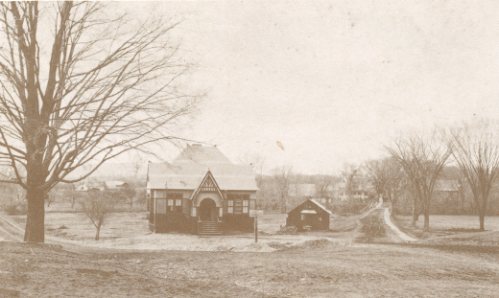 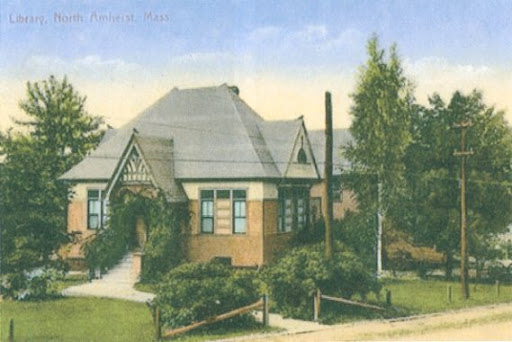 In 1996-97, the building was repainted in its original colors and the interior restored thanks to a very generous (then-anonymous) gift from William Holland (father of current Jones Library Trustee Chair Pat Holland).

The library is now in the midst of a double makeover.

At the close of last month, at the very end of the warm weather just before the incessant rains hit, workers began cleaning the exterior in preparation for repainting, funded (along with some modest electrical and insulation work on the interior) by $ 12,000 for historic preservation from the Community Preservation Act (CPA) that Town Meeting voted earlier this year. 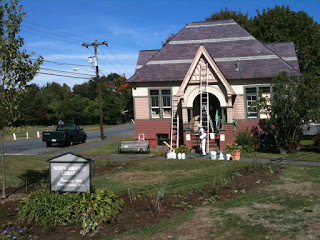 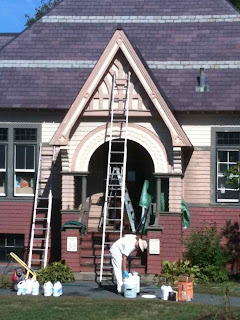 However, as I pointed out at the time, although the Historical Commission is always pleased to support the needs of our valued libraries, the fact that the structure had not been repainted since the original restoration nearly 15 years ago gave one pause.  Regular touch-up and occasional full repainting are part of normal maintenance, an obligation that falls on owners of Colonial mansions and contemporary ranch houses alike.  Unfortunately, if enough time elapses, deferred maintenance turns into preservation work.  This was the conundrum—greater by several orders of magnitude—that we faced when Town officials first suggested using CPA funds to repair the Town Hall masonry.  Although numerous projects are worthy and could conceivably qualify as historic preservation work in any given year, there is a great temptation, particularly in times of fiscal constraint, to fund as many undertakings as possible outside the regular budget, and CPA cannot become a piggy bank for use on rainy days.  Otherwise, local historical commissions, which have clearly defined mandates under state law, are forced to set aside their own carefully devised priorities and respond instead to external, ad hoc demands.

The key is good strategic planning.  Our Historical Commission works on the basis of a ten-year Preservation Plan.  In the realm of town government as a whole, our new Master Plan furnishes the prime directives.  In addition, the Select Board has in recent years begun to emphasize rational planning and the long-term view, thus avoiding some of the penny-wise and pound-foolish mistakes of the more distant past.  Since I have joined that body, I have been very pleased and encouraged to see how this approach is reflected across the board (no pun intended), from the setting of the Town Manager's performance goals, to the work of the Joint Capital Planning Committee (JCPC), on which I serve—along with two Library Trustees.

Clearly, the Library (like the town itself in the case of Town Hall) in the past simply did not plan ahead, and ironically, the windfall gift of the 1996-97 restoration may have brought about a false complacency and helped to postpone precisely the sort of strategic thinking that was necessary.  One simply cannot do business that way today.

I am gratified to see that the Library is now engaged in applying more sustainable principles in its own domain. Indeed, long-term and strategic planning appears high on the list of the Trustees' priorities (more on that in a later post). The Historical Commission successfully supported additional CPA funding for the preservation of the collections and building of the main Jones Library branch:  $ 40,000 for restoration of the slate roof and $ 75,000 for archival climate control, as well as $ 20,000 for the latest installment in a joint document conservation project involving Jones Library Special Collections and the Town Clek's office.

It was not only CPA funds that were at work on the North Amherst Library.  Over a year ago, the immense and stately beech that had reigned over that landscape succumbed to disease and had to be cut down.  The town planted in its place a Princeton Elm (a new variety derived from one of the few disease-resistant old specimens), donated by Hadley Garden Center. This weekend, volunteers, inspired and guided by Trustee Chair Pat Holland, continued recently begun improvements to the now open triangular lawn on which the library sits, planting shrubs and autumn flowers. 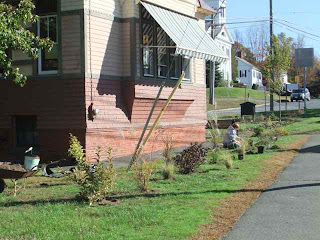 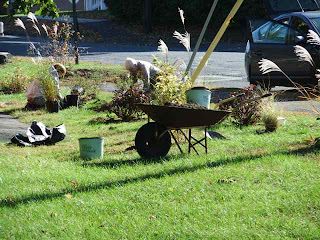 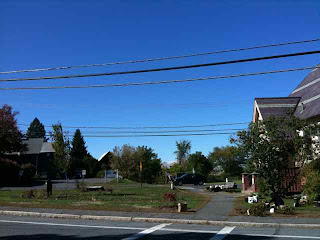 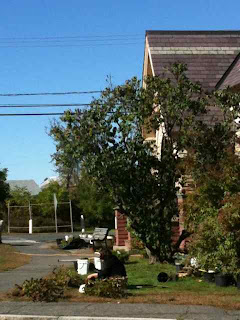 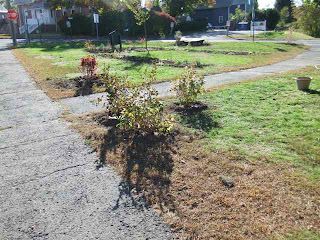 Carpenter and Morehouse, in their History of the Town of Amherst (1896), describe the library as "a neat and ornamental structure." it is becoming such once again, with grounds to match.