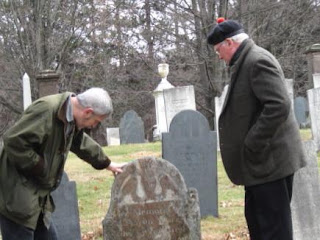 Members of the Amherst Historical Commission recently inspected and approved headstone restoration work completed by Monument Conservation Collaborative (MCC) of Norfolk, Connecticut. In three older sections of this ancient burying grounds, 269 headstones were repaired, righted, and reinstalled using $145,000 in Community Preservation Act funding. MCC has provided before and after images of each of the stones and descriptions of the repairs performed; some of these will be posted on the Historical Commission’s website.
West Cemetery, Amherst’s oldest, includes not only the Dickinson family plot, a frequent destination for Emily Dickinson devotees, but also an early African-American burying area, and the graves of some of Amherst’s earliest settlers. New signs have been designed and will be fabricated and installed to introduce visitors to the cemetery.

Irving Slavid, President of MCC, said “I have worked in historic cemeteries for over 15 years and the West cemetery in Amherst has more visitors than any cemetery we have worked in. Apart from local visitors, we also met people from all over the country and some from Europe. I remember an Italian couple making the journey to see Emily without speaking English. These travelers were devoted. People coming in by car or parking in town and walking through the cemetery, mostly all coming to visit Emily. Some stayed for a fair amount of time.”

In 2006, muralist David Fichter and local artists created the Amherst Community History Mural, which depicts historical Amherst figures along the back wall of the Amherst Carriage Shops overlooking the cemetery. Additional signs will describe the mural for visitors to the cemetery, and brochures describing the images and personalities depicted in the mural are available at the site.

Restoration of the cemetery is still incomplete. Additional CPA funding has been approved for repairs to the town tomb, ironwork around several family plots, and for additional landscape restoration. This year, older areas of the cemetery were re-seeded with native plants including lupine and forget-me-not, and were left unmowed, to begin to recreate the meadow that would have been characteristic of the area in the 18th and early 19th centuries. These plantings are being installed with help from members of the Alpha Tau Gamma fraternity of the Stockbridge School at the University of Massachusetts, and generous contributions from the Hadley Garden Center.

Members of the Historical Commission expressed concern that a few of the restored headstones have already been the victims of new vandalism. Under normal conditions, repairs should last anywhere from twenty to fifty years. Members of the Historical Commission continue to discuss additional safety measures that might better protect the cemetery, the mural, and the headstones, both those already repaired and others that will be restored in an upcoming project.

In the photo above: Jim Wald, Chairman of the Amherst Historical Commission and Jonathan Tucker, Director of Planning, examine the recently repaired headstone of Aaron Warner who died in 1774. The Aaron Warner House on West Street has been nominated for listing on the National Register of Historic Places.