Dedication of Plaque Honoring Robert Frost and the Jones Library

This past week has witnessed a string of events celebrating Robert Frost's life in, and long connection to, Amherst. It was a unique connection, for not only did he live, teach, and write here: Amherst is also home to an unrivaled collection of Frostiana, thanks to the foresight of librarian Charles R. Green. Soon after taking charge of the Jones Library in 1921, Green began to collect Frost's papers as well as publications. Current Curator of Special Collections Tevis Kimball, has, since her arrival in 2001, made a sustained effort to promote and care for the holdings associated with Frost, Dickinson, and other local poets. 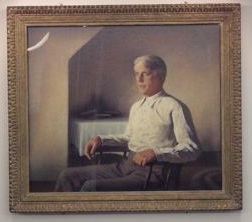 Writing in last week's Bulletin, Bonnie Wells provided a nice overview of the history and significance of the Frost collection:

The yellowed manuscript bears the spidery script of the poet Robert Frost. Best of all, it offers a window on the evolution of one of the four-time Pulitzer Prize-winning poet's best-loved works.

In the draft of "Stopping by Woods On a Snowy Evening," words and lines are crossed out and substitutions made. "A falling flake" becomes "a downy flake." "Between a forest and a lake" becomes the final "Between the woods and frozen lake."

"You can see the poet at work," said Tevis Kimball, curator of special collections at the Jones Library in Amherst, where the manuscript is one of some 12,000 items in the Frost Collection. (read the rest)

It was that particular connection that earned the Jones Library status as a "literary landmark" from the Association of Library Trustees, Advocates, Friends and Foundations (ALTAFF).

The ceremony was originally scheduled to be held near where the commemorative plaque will be affixed to the wall at the main entrance. Heavy rains, however, forced the event indoors. It was probably a more congenial setting, and in any case, we fared better than our poor neighbors in Hadley, who had scheduled a host of outdoor activities for their 350th-anniversary "History Fair Weekend." I'm sure that it was not too problematic to move some of the craft and other "living history" demonstrations indoors, but what about the military ones? The website explained:

Firing Drills will be at 11 am, 1 pm and 3 pm. In case of heavy rain, please go to the Most Holy Redeemer Church.

(Guns and rosaries, anyone??) 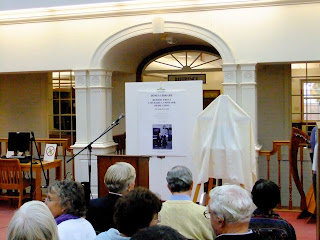 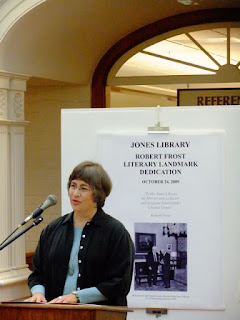 Accepting the honor on behalf of the Jones Library, Director Bonnie Isman said that the plaque really "celebrates poetry and poets in Amherst as a whole." "Power is in poetry," she declared, for as Frost himself put it, "I'm not a teacher, I'm an awakener." She recalled her own youth: Little did she imagine, when she as a child read "Stopping By Woods on a Snowy Evening," that she would one day become the director of the institution that owned the manuscript of that poem. It was therefore important to understand, she continued, that the award honored not just poets and poetry, but also the keepers of poets: the collection's originator, Charles Green, and the current Special Collections librarians Tevis Kimball and Kate Boyle. Without the librarians and archivists, essential pieces of our cultural heritage would not have been preserved. 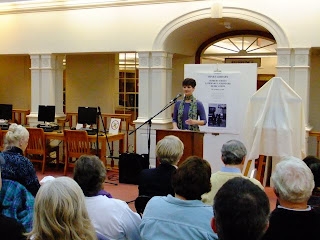 Amherst Select Board Chair Stephanie O'Keeffe praised the Jones as "another jewel in Amherst's very impressive crown of cultural and literary attractions." Cultural tourism, she predicted, "will become an increasingly important industry," distinctive of western Massachusetts. The collections of Frost, Dickinson, and other literary figures housed in the Jones library of this small New England town "would be the envy of major metropolitan libraries." 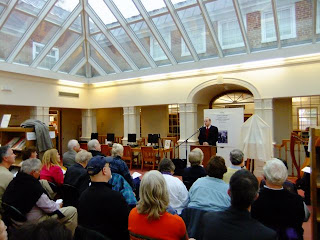 Our State Senators Ellen Story and Stan Rosenberg are deeply dedicated to their district, and what is more, have been especially committed to lending their support, in word, deed, and presence to our cultural endeavors. Although other obligations prevented Ellen from attending, Stan was present and began his remarks by noting that the Jones would also be honored this week at the State House. "As some of you may know," he deadpanned, "I'm in politics." [predictable laughter] "We're not supposed to like the arts or even be able to talk about them." But the arts were in fact essential, he insisted. He then proceeded to cite (after his fashion), the famous 1780 letter from John Adams to his wife Abigail (here in the accurate original):

I must study Politicks and War that my sons may have liberty to study
Mathematicks and Philosophy. My sons ought to study Mathematicks and Philosophy, Geography, natural History, Naval Architecture, navigation, Commerce and Agriculture, in order to give their Children a right to study Painting, Poetry, Musick, Architecture, Statuary, Tapestry and Porcelaine .

Unfortunately, Stan ruthlessly abridges and recycles the text. I suppose I can console myself for the loss of "Naval Architecture" (it hardly trips off the tongue, and most people have no idea what it is) and other items for the sons, but it pains me when he stops at painting and poetry and leaves out the other fine and especially decorative arts (to hear a statesmen speak of a "right" to study "Tapestry and Porcelaine" is to open a new window onto the democratic and cultural promise of the Republic). It's a great letter, I've known it for ages, and I still love to hear it. However, I've also heard our distinguished State Senator use it on at least half a dozen occasions—and I attend only a fraction of the events at which he appears. I mean, really, Stan, get some new material. It's time to retire that old warhorse before it becomes an old nag. 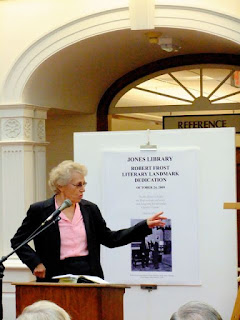 Robert Frost's granddaughter Lesley Lee Francis gave the most distinctive performance, characterized by idiosyncratically fast-paced and somewhat meandering remarks. Drawing upon her book, Robert Frost: An Adventure in Poetry, 1900-1918, she recounted episodes from his family life and role as both father and progressive writing teacher to his children. Because William Pritchard had read "October" earlier in the week, she instead decided to read "My November Guest," which proved singularly appropriate to the meteorological conditions:

My Sorrow, when she's here with me,
Thinks these dark days of autumn rain
Are beautiful as days can be;
She loves the bare, the withered tree;
She walks the sodden pasture lane. 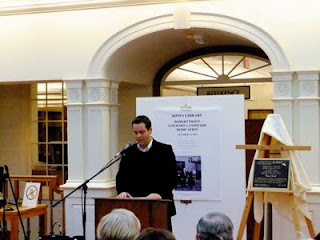 Chamber of Commerce Director Tony Maroulis, like Stephanie O'Keeffe, called attention to the growing importance of cultural tourism as a clean and therefore desirable form of economic development. He declared that "arts, education, and culture define our community," singling out the role of the Jones Library. The institution that he called "the heart of Amherst," in both the physical and figurative senses, attracts some 350,000 visitors per year. It is, accordingly, "the busiest place in Amherst at any given time," which brings a great deal of revenue to the town when users visit nearby restaurants, cafes, and other businesses. 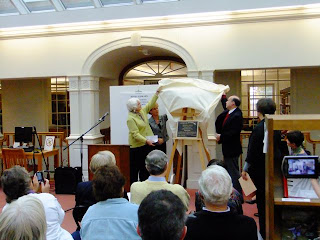 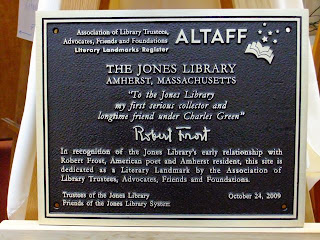 The events this week not only formed part of the Amherst 250th anniversary celebrations, but also coincided with the 50th anniversary of the dedication of the original Frost Room at the Jones Library during the town's bicentennial in 1959. In this 250th anniversary year, the Historical Commission has sponsored and won Community Preservation Act funding for four related projects: three at the Jones Library: renovations of the old roof, an engineering survey of climate control systems in Special Collections, conservation and digitization of Special Collections holdings; and the creation of the Amherst Writer's Walk, establishing markers at the homes of Amherst literary figures, including one of Frost's former residences. 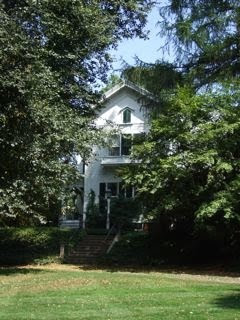 I just hope she remembers those remarks when it comes time to vote on their budget and the lousy $30,000 or $40,000 extra that may be required in order to avoid de-certification.