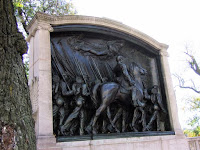 The Saint-Gaudens memorial to Col. Robert
Gould Shaw and the Mass 54th on Boston
Common, opposite the State House
• lecture by David Lubin (Dartmouth, 2007)


The presidential transition is heavy with symbolism, both coincidental and contrived, beginning with the fact that the inauguration of the first African-American president follows on the heels of the Martin Luther King holiday.

That we have an active 54th is a situation that dates only from this autumn and is something of a story in itself.  At the suggestion of Major General Joseph Carter, the first African-American commander of the Commonwealth's National Guard, Deval Patrick--the first African-American governor of the Commonwealth--redesignated the state National Guard Ceremonial Unit as the 54th Massachusetts Volunteer Infantry in honor of its famous predecessor.

As chance would have it, the 54th is also part of Amherst's history, and this is our 250th anniversary year.  Although the Mass 54th is famous as the first all-black regiment, African-Americans enlisted in other units as well:  in the case of Amherst residents, in the 5th Massachusetts Cavalry.

Twenty-one black residents of the town served in the war (†=killed):

The story of Sanford Jackson is the most dramatic.  In 1840, he was one of several African-American residents of Amherst who forcibly intervened to prevent a young African-American servant, Angeline Palmer, from being sold into slavery by her employers in a neighboring town.  Although temporarily jailed for abducting Palmer and keeping her in hiding, Sanford Jackson and his fellow rescuers were in fact treated as heroes in Amherst.  Jackson later married Palmer.  He was one of three Jackson brothers who enlisted in the Union Army; only one came back alive. Sanford took part in the now-famous assault on Fort Wagner but died soon afterwards of his wounds and was buried in South Carolina. 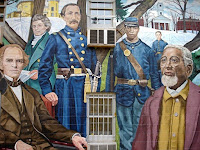 Sanford Jackson is commemorated on the history mural in West Cemetery: Since we have no portrait likeness, the artist used the features of a soldier depicted on a contemporaneous recruiting poster.  Sanford Jackson stands behind teamster Henry Jackson (no relation), who played a leading role in the rescue of Angeline Palmer.

Selected press coverage of the 54th and the inauguration:

(Visit this blog again for updates of Amherst 250th celebrations and commemoration of our African-American heritage.)