The Shape of Our Politics (candidate statement deadline today, and more)

Speaking of deadlines: As most Amherst residents know, the 2010 census resulted in a redistricting not only of congressional seats, but also of Town Meeting. The office of the Town Clerk, GIS staff, and a citizen Districting Advisory Board worked hard to come up with new districts that meet that met the daunting legal standards of proper proportions and shape.

Just over a year ago, there was one unrelated glitch, when the Select Board and Clerk's Office, misinterpreting news stories on the closing of North Church as the home of regular worship, inadvertently reassigned the voting site for Precinct 1 from that congregation's parish hall to Immanuel Lutheran Church in the neighboring precinct. (For better or worse, I was stranded out of town on that Monday and was thus unaware of the screw-up until I returned home and began to receive irate emails from fellow residents of my hyperboreal precinct.) Soon thereafter, the Select Board rectified the mistake. 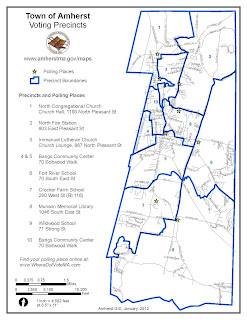 But back to deadlines. Because of the redistricting, all 240 seats representing the 10 precincts in Amherst Town Meeting are up for grabs this year, rather than being distributed over a triennial cycle. (In order to restore the triennial system, highest vote-getters in each precinct will get three-year terms, the next-highest will get two-year terms, and the remaining winners will get one-year terms.)

Citizens had to submit nomination papers by Valentine's Day (love that).

Meanwhile, the last deadline is upon us:  candidates are asked to submit brief statements about themselves and their reasons for running to the League of Women Voters by the end of the day today (these will also appear in the Amherst Bulletin shortly before the election). It's especially important this year, and yet, because of the larger-than-usual number of candidates, statements will have to be shorter than usual. The cunning of reason again, I guess. The winners will get plenty of chance to talk in Town Meeting, and having to distill one's personal-political "mission statement" into a mere 40 words (only about 40 percent more than a "tweet," if we reckon a word at the traditional five characters) is good practice for having to give a speech in two to three minutes.

One reason that we are mandated to come up with basically compact and contiguous districts of roughly equal population with a compelling rationale is that redistricting was, historically, abused: at first for mundane partisan-political purposes, and more recently, for racist or other discriminatory purposes. The mother of all cynical redistrictings was of course the "Gerrymander," celebrating its 200th anniversary this year (one of the February anniversaries I was not able to note in time), named after (sad to say, yes:) our Massachusetts Governor Elbridge Gerry (last name pronounced, by the way, with a hard "G" rather than a "J").

As the always informative and often entertaining Mass Moments (a project of the Massachusetts Foundation for the Humanities) explains:


...in 1812, a political monster — the "Gerrymander" — was born in the Massachusetts State House. Governor Elbridge Gerry signed a bill that created oddly-shaped voting districts in several parts of the state. The lines of these districts gave Gerry's party an advantage in the upcoming election. An artist added a head, wings, and claws to the strange shape that was the governor's new home district and declared it looked like a salamander. A quick-witted friend decided a better name was "Gerry-mander." Within a month, the image appeared as a cartoon in the local papers and gerrymander, later gerrymander [with a soft "g"], entered the language. The term has referred ever since to any deliberate redrawing of voting districts to influence the outcome of an election.

None of that stuff here.

Turn in your statements.