Today is the birthday of Susan Huntington Gilbert Dickinson (Deerfield, 1830-Amherst, 1917). Susan married Emily Dickinson's brother Austin in 1856, and the couple lived and raised a family in the newly built Evergreens, next to the Dickinson family Homestead, where Emily resided for the remainder of her life.  Although an intellectual in her own right, and a central figure in Amherst cultural life (she played hostess to figures such as Ralph Waldo Emerson and Harriet Beecher Stowe), Susan has been overshadowed by the more dynamic and self-promoting Mabel Loomis Todd, with whom Austin carried on a notorious thirteen-year affair.

One gets a sense of Susan's personality and style from the manuscript, "Annals of the Evergreens" (Harvard University Library), which Martha Nell Smith, who has written extensively on the author, has posted online.  Among my favorite passages are the descriptions of the difference in the rhythms and customs of life in mid-nineteenth-century Amherst and Northampton.

Turning over pages of The History of The Meadow City recently, I was freshly impressed with the chapter on their past social life written by Mrs Emerson of Amherst; who by her temperament, talent, ancestry and social gift was especially fitted to draw the fascinating picture. The social life of Amherst two generations ago was no less unique in grace and simplicity, although differing always from her rival of those days across the river quite markedly in certain usages social habits held contraband by piety and conscience in Amherst, -- usages rather more native to the larger town with its more courtly traditions; and as was natural to the "shire" town touching the world through more cosmopolitan channels than our own. The harmless bores of cards and dancing, common there according to Mrs Emerson, were not even so much as mentioned long after they were common in Amherst as suitable nay possible for ? beings ? ? ? ?

Bless Northampton! If there has been jealousy between us we all boast of her now when we get far enough away from home. Fifty years ago and more I could have shown you, dear moderns, in the small circle of Amherst, -- for there was but one then, -- as beautiful girls, -- or young ladies as they were then called, -- as ever graced any drawing room. As accomplished well poised matrons, as chivalric young men, -- men both old and young as full of high purpose and generous accomplishment as could be found in any town, either university or commercial.

Northampton! How jealous we were of her as our men trooped to to her banks when for years we had none and the ladies pressed to her dress-makers & milliners or hung over the counter at Stoddard & Lathrops in hopes of some more distinctive elegance than Sweetser & Cutler could offer from their repertoires of sober merinos & good quality of black silk - we felt sure the college was more than bank or Court House and gradually forgave her smartness and praised her beauty. Oh, scimitar of Fate she has more colleges than she can manage to day but they are only womens and we are still amiable! (2)


The occasion of Susan's birthday provides me with a chance to make amends for an omission, as I was ill on the occasion of Emily's birthday, December 10, and thus fell behind in posting.

The Dickinson Museum celebrated the poet's birthday—the 180th, this time—with its traditional open house, though with a slight difference. By custom, the first guests up to the number of the anniversary year have received the gift of a rose sponsored by an anonymous donor. The custom ends this year, but we are compensated by learning the identity of the donor: it turns out that it is retired physicist James Fraser of Acton. As he told the Boston Globe, he happened upon Dickinson's poems almost by accident and eventually got hooked.  Already as a teenager, he found, "There was something about her poems that was a little different."  Much later, a biography pulled him in more deeply.


"My interest just sort of snowballed from there,” he said. He visited the Dickinson house, joined the Emily Dickinson International Society, and initiated the annual gift. This month’s open house and gift of roses was the last of its kind. Times change and so should birthday celebrations, Fraser said. Next year’s observance is a mystery for now.

it is really entirely fitting. I've known Jim for a number of years, and he is the kind of supporter that all such cultural institutions need.  Literature and literary-historical sites remain alive when they speak not just to and for academics, but also to the general public.  One of the most fascinating things about Dickinson, to my mind, is that she is at once one of the most cerebral and difficult of poets, yet also the one who, more than almost any other in American literature, engages all readers on all levels. Somehow, her labyrinthine language and the mystery of her meaning draw people in rather than intimidate them and keep them beyond the threshold.  Fraser embodies the classic but endangered ideal of the humanist-scientist, equally at home in the library and the laboratory. His annual and anonymous gift has, these past thirteen years, quite literally helped to draw people—residents and tourists alike—into the world of Emily Dickinson.

The births of both Emily Dickinson and her friend, Helen Hunt Jackson (née Fiske; profile on this site here), in 1830 are recorded in one of the unassuming treasures of the Jones Library Special Collections here in Amherst.  One Dr. Isaac G. Cutler kept a record of the pregnancies—1276 births; 60 stillborn—at which he had assisted from 1805 to 1833, the year before his death.

The two births appear on the same page:  Helen Fiske's entry is fourth from the top of the right-hand page, and Emily Dickinson's, tenth from the bottom.The title of the document—"List of Women Delivered by I.G.C."—notwithstanding, births were recorded only under the name of the father.

As chance would also have it, the lives of the three women converged ever more closely toward the end of Dickinson's life.  In 1882, the poet wrote to Susan,"With the exception of Shakespeare, you have told me of more knowledge than any one living. To say that sincerely is strange praise." In late 1884, Jackson asked Dickinson to "make me your literary legatee & executor."  It was not to be.  She died in 1885, followed by Emily Dickinson in 1886.  As the Dickinson Museum explains, "After the poet's death, her sister Lavinia asked Susan to edit the poems for publication. Lavinia soon grew impatient with Susan's slow editorial pace, however, and transferred the poems into the hands of Mabel Loomis Todd, who published three volumes during the 1890s with the aid of Thomas Wentworth Higginson." The notoriously complex history of the publication and disposition of the manuscripts haunts scholars to this day.

Emily, Lavinia, and Susan Dickinson, as well as Helen Hunt Jackson and Mabel Loomis Todd, are depicted on the Amherst Community History Mural in the 1730 West Cemetery. 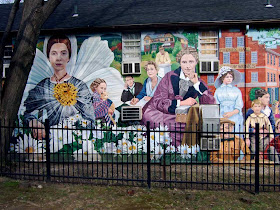 Spam wastes your time and mine, and Google's Blogger software now automatically filters and blocks it.